Muslim Monuments. Qutub Minar, a UNESCO designated site in Delhi. Its construction started in 1192 by Qutub Uddin Aiback, who founded the slave dynasty rule in India and was a a former slave. a slave dynasty also ruled from 1240 to 1517.  The slave dynasties are also called Mameluke dynasties. Please see my post “Slaves who became Sultans (kings)” for more details.  The Qutub Minar is 73m high. I took this picture before it was designated as a   UNESCO site and since then the complex has been restored. Khaliq 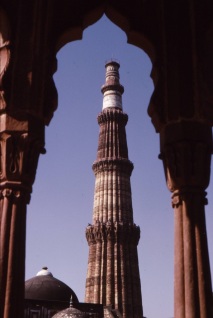